Difference between revisions of "Installation"

If you used an earlier version of Wenlin, and you made changes to any of the dictionary files, you may want to preserve those changes, and be able to use them with the newest version. It is possible to run Wenlin 3 and Wenlin 4 on the same computer without interference. You may find this convenient especially while making the transition. It is not necessary to uninstall earlier versions before installing Wenlin 4.3.2, so don't be in too much of a hurry about uninstalling.

Wenlin 4.3.2 uses a smaller format for sound files than earlier versions (MP3 instead of WAV). You can save disk space by using the new, smaller files. On Mac OS, they're now stored inside the application, so you'll never see them, you'll just hear them! On MS-Windows, they're stored in a folder named WenlinSound, which is created by the setup program. You don't need to install them separately (unlike earler versions).

Wenlin 4.3.2 uses a different name for its data folder, “Wenlin432Tushuguan” than any earlier version, by default. (Note: túshūguǎn 图书馆[圖書館] means ‘library’.) When you update from an earlier version, your older dictionary files will not be replaced, in case you have made changes to them.

There's more information about this in Appendix C. For now, you might just leave your older version of Wenlin alone and go ahead and install Wenlin 4.3.2.

The setup program puts the WenlinSound folder, containing sound files, in the same location as the Tushuguan.

• CAUTION: With recent versions of macOS, there is a bug involving iCloud and the Documents folder (described below). It is likely to occur unless you work around it by following these installation instructions carefully. (Briefly: the work-around is to install “Wenlin432Tushuguan” in your home folder instead of your Documents folder. Unfortunately, the Documents folder is the default if you click the “OK, copy it now” button.)

In Finder, choose Preferences from the Finder menu, click on Sidebar and check the box next to the house icon 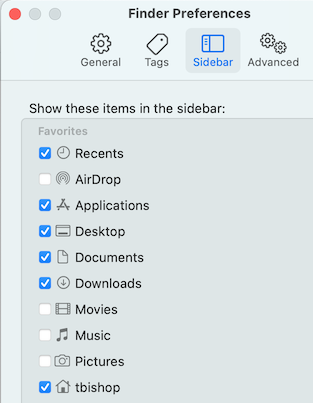 Notice that in the screenshot the name by the house icon is “tbishop”, while on your computer it will be your own user name -- this is known as the “home folder” (even though it isn’t named “home”!)

• If you obtained Wenlin by downloading a disk image file, double-click its icon to mount it and display the Wenlin application icon

If you can't find the file you downloaded, try looking in the “Downloads” folder, using the Finder

In Finder, you can choose Downloads from the Go menu
Double-click the file you downloaded to mount it
Find the “Wenlin” application icon

• Drag the “Wenlin” application icon to the “Applications” folder

Copying the application may take a minute

• Unmount the disk image, by dragging its icon to the trash
• Open the “Applications” folder

In Finder, you can choose Applications from the Go menu

The first time you run Wenlin, you'll be prompted to press a button to finish the installation, which involves “Wenlin432Tushuguan” getting copied from inside Wenlin.app to another folder.

• IMPORTANT: If you use iCloud, make sure Apple doesn't move your Wenlin data to the cloud and delete it from your local storage! This could cause mysterious errors if your Mac is configured to store Desktop and Documents Folders in iCloud and to Optimize Mac Storage. You can either turn off those options in System Preferences, or install “Wenlin432Tushuguan” in your home folder instead of your Documents folder. (See Apple's documentation.) For this reason, we now recommend that you NOT click the “OK, copy it now” button. Instead, do the following.

A dialog will appear, with “Documents” selected in a menu near the top

• From that menu, choose your home folder (whose icon is now conveniently in the Sidebar, and has the same name as your username); then press Return or click the “Choose” button

Copying the Tushuguan may take a minute, then its current location will be displayed, along with more buttons, which you can ignore, since you have finished the installation!

When Wenlin is running, you can always find the Tushuguan (data folder) by choosing Open Wenlin Folder in Finder from the File menu.